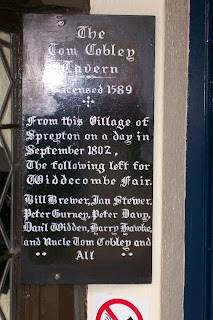 This was a gentle day, as there was plenty of time for me to get to South Zeal to meet up with my golfing friend Tony. He had been intrigued by my Watershed venture, and had offered me his company across Dartmoor, and a couple of nights in his cottage.

After walking through Copplestone, I briefly followed the Two Moors Way at Clannaborough Barton. There's a magnificent herd of Red Ruby Devon cattle which have been bred there by the same family for at least 6 generations. I also spent time at the parish church next to the farm, and was amused to see a notice saying that the electoral roll contained nine and nine-fourteenths people! There were plenty of house-martins, and I could hear buzzards calling most of the day.

There were no roads or footpaths available between Thorne farm and after Hilldown, and I needed a minor trespass to get through. The only challenge came from a dog. Lunch was at the Tom Cobley Tavern in Spreyton, from where the ill-fated trip to Widdecombe Fair set out in 1802.

Straightforward road-walking after lunch brought me to South Zeal by 4pm, and I was met there a bit later by Tony. The Watershed turns south just before the village - at 663931.
Posted by Malcolm Wylie (previously Watershedder) at 20:00