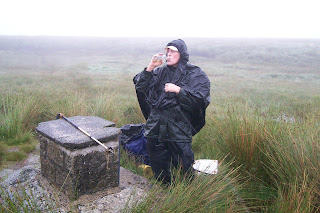 After a splendid evening with Tony and his daughter, he and I were back on the Watershed by 8am - in the hope of missing the worst of the downpour which had been forecast.

As it turned out, we started in light drizzle which got progressively heavier - we were drenched. There was also a strong wind on the tops, so it was a tough walk across Dartmoor. I was expecting this to be the last really wild day on the whole Watershed, and it certainly was wild.

We passed a well-preserved stone circle on our way up to Hound Tor, on a well-defined path. After that, the going was rougher to Hangingstone Hill. Between there and Great Knesset is a large area of bog, which gives rise to several river systems. We looked for and found the Cranmere Pool Letterbox (marked on the map and shown in the photo). Someone had left half a bottle of straw-coloured liquid in it, which Tony nobly sampled first. It was good stuff! We signed the visitors book, and I left a few postcards there. It was gratifying to learn later that they had been duly posted by a later visitor, according to custom.

We floundered across the trackless moor in deteriorating weather and were relieved to get down to Sourton by 3:30pm. We left the Watershed at 551907, and took a bus and taxi back to the car.
Posted by Malcolm Wylie (previously Watershedder) at 20:00