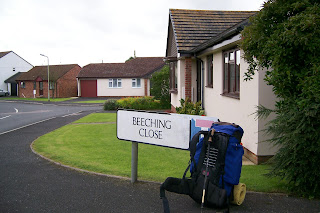 After the morning service in the church next to Tony's cottage, he dropped me back on the Watershed at 12:30pm. I took the path down to Meldon (about 4km SW of Okehampton, which is now the terminus of the railway system).

I walked a short way along one of the railways which was axed by Beeching (and is now a cycleway), and then onto another, which had previously run through to Bude. This route started off quite walkable, but eventually became completely overgrown, so I transferred onto the A3079 and stayed on it all the way to Halwill Junction (onto map 190).

I had a good supper at the Junction Inn and learned some of the history of the place. Beeching's decision to close the branch lines which converged at Halwill led to the closure of the station in the 1980s. I was amused at the ironic naming of the housing estate built over it.

The disused line to the north has been converted into a cycleway and nature reserve, and made for some good walking. It then became a forest track. The map showed that I needed to detour from that track, but the Higher Whiteleigh owner refused me entry, and I had to retrace my steps and cross a small trickle. Not happy.

Once out of the forest I was on the A3079 then the A3072 as far as 382042, where I camped (rather late) in another poultry farm with permission.
Posted by Malcolm Wylie (previously Watershedder) at 20:00