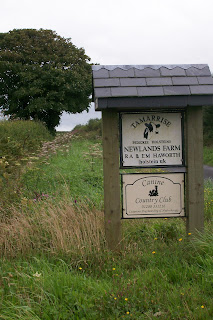 The River Tamar marks the boundary between Devon and Cornwall, and it rises within 10km of the north coast. Today's walk  was entirely on roads - narrow in the morning and then south on the busy A39 in the afternoon - apart from a short but desperately difficult 200m round the head of the river.

On the way north I saw some balloons celebrating a 60th birthday, a few deer, and heard the raucous geese on the Tamar Lakes. [When I got home I discovered that one of my golfing friends had been the chief engineer for the building of their dams.]

On reaching Hardsworthy Farm I asked if I could go across their land to Newlands Farm, because the Watershed went that way. I got permission but the farmer said that there was no way through. I said that I'd encountered lots of difficult terrain over the previous 12 years and that I was sure I'd manage. Little did I know.

Suffice it to say that it took me an hour to go 200 metres. I really could have done with a machete. It was swampy underfoot and virtually impenetrable bushes above. I eventually emerged, absolutely filthy and bleeding from several places.

After brushing myself off, I walked up to Newlands Farm, and found a sign "Tamar Rise" (see photo). This was followed by 6km down the A39, with good coastal views - quite a treat to finish off this penultimate Section. I left the Watershed in Kilkhampton at 252112, and hitched down to Bude, where I caught the last bus to Exeter by the skin of my teeth. In the book I'll say how I thought I was being kidnapped by my driver.

The stats for this Section were 179km and 1028m of ascent.
Posted by Malcolm Wylie (previously Watershedder) at 20:00